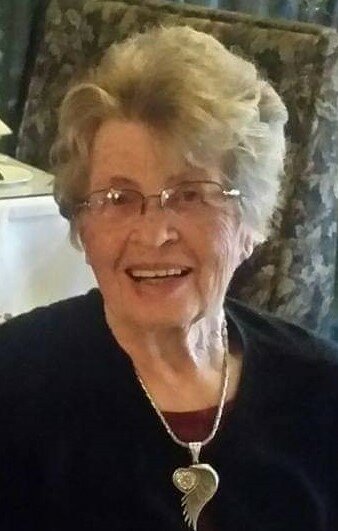 PIA M. SCHMUCKI age 92 of Black Hawk South Dakota, formerly of Jefferson, passed away at the Hospice House in Rapid City, SD.  Pia was born on July 30, 1929, in Grenzach Germany to Erwin and Martha (Zimmerman) Gehweiler.

She married August K. Schmucki. He preceded her in death on June 3, 2010.  August and Pia moved to Jefferson, WI in 1965.  She was employed at Countyside Nursing Home in Jefferson for 27 years.  Pia (Queen Momsie) as we called her, and Oma by Grant, moved to the US from Switzerland with her family in 1965, became a citizen and learned English.

Working as a Nurses Aid for 27 years, she shared her love and smiles and heart with the elderly.

She would share her stories of her childhood in Nazi Germany. Life under extreme conditions, and hunger.  Mom was the anchor that kept her family, and friends together. She was a loving social lady who had a huge circle of friends all around the world.  Her grey address book which became later like her bible, she would reminisce turning the pages, and sharing their life stories. She clutched that book and hung onto it like it was her lifeline from her past to her present.

Music was her world and her sanity; you could hear her singing and whistling all the time when we grew up.  She played piano at an early age with her brother.  She loved to cook and bake always looking for new recipes.  She enjoyed reading and doing word search.

And her favorite food was fish, fish, and more fish. Swiss Chocolate was always on the list.

Mom was very artistic with crafts and drawings, and she also did beautiful paintings of Birds and Butterflies.  Her sense of humor was outstanding. One could laugh with her on the silliest things until we cried.  Our Mom never asked for anything but gave everything. She gave unselfishly to all and more.  Her smile was so infectious and so angelic, pure from the heart.

Living with us has brought us so much Joy, and so many tears as she transitioned closer to the end of her life. Her Grandson Grant cared for her for 5 years and was transformed by her guidance and love. She then moved to Colorado to be taken care of by myself and my husband Dave. She treasured the phone calls from her son Peter and Holly. She became ecstatic when receiving mail from Europe from her Relatives.

It was love and joy and adventures until she became tired, and older. Her spirit and body became tired after a major stroke, until she was carried away by angels and received into the loving arms of our Heavenly Father.

She is preceded in death by her husband, and her brothers.

Memorial services and burial will be held at a later date.

To send flowers to the family or plant a tree in memory of Pia Schmucki, please visit Tribute Store