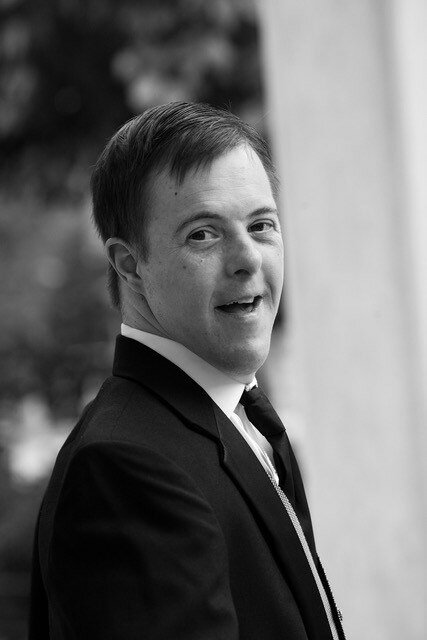 PAUL FLANDERS WOOLFLEY (age 52), of Jefferson WI died comfortably at the Saint Isadore Home of St. Coletta on February 11, 2022. Born in Pisa, Italy on June 28, 1969, to parents on diplomatic assignment, Paul was, soon thereafter, diagnosed with Downs Syndrome, a condition less understood then than today.  Over the ensuing twenty years in Italy and the United States, he lived a happy childhood with affectionate and protective family at his side.  Under his mother’s patient tutelage, and to the surprise of early teachers, he learned to read and write.

In 1989, Paul settled at St. Coletta in Jefferson Wisconsin, where he continued to flourish, first under the loving eyes of Franciscan sisters, and as times changed, gifted and dedicated lay caregivers. Paul deeply loved St. Coletta and called it home.  A graduate of its school program, he went on to live in a series of its community homes in Jefferson, forging numerous life-long friendships.  He was a long-time participant in Special Olympics bowling and basketball, and several times represented St. Coletta at the State Games.  He enjoyed displaying his skills in these sports during frequent trips to visit family, often soundly beating his nephews and nieces.

Over his three decades at St. Coletta Paul worked at a variety of jobs, including time at McDonalds, UW-Whitewater, Country Market, Bon Ton Bakery, and the Fireside Dinner Theater (where he was also a loyal and regular customer).  But he was most proud of his 12 years as a shelf-stocker at the Jefferson Walmart, where he became well recognized by many townspeople. At the time of his retirement, he was the only remaining member of the team that had initially opened the store.  Although Paul enjoyed all these employments, he regularly reminded his St. Coletta caregivers that they were just interim occupations until his dream job – head coach of the Chicago Bears – became available. Regrettably, the Bears never called.

Paul’s interests included all things sports, typing on his computer, eating well, going to movies, listening to music and doing whatever it might take to make people laugh.  Paul sang in the Choir at St. Coletta and was a frequent altar server at weekly mass. He enjoyed recurring vacations with family, and once traveled unaccompanied by plane to visit family in California and fulfill his longtime wish to see that state.

Paul is survived by his father, HL Dufour Woolfley Sr. of Cassville, WI, his sister Mary Jane Stowers of San Antonio, TX (John), his brother H.L. Dufour Woolfley Jr. of Bowie, Md. (Karen) his brother Bernard F. Woolfley of Arlington, Va. (Mindy), and an aunt, Rosalie Johness of New Orleans, LA.  He was the favorite Uncle of his 14 nieces and nephews, and much loved by numerous friends.

Please join us on Thursday, March 10, 2022, at the Little Flower Chapel on the St. Coletta campus. At 12:45 a family-led Time of Remembrance will be held. The memorial mass will occur at 1:00 PM. Refreshments with Paul’s family, his many resident friends and staff will follow. Private burial in New Orleans, Louisiana.

In lieu of flowers and in honor of the wonderful care Paul received for 33 years, please consider a donation to St. Coletta of Wisconsin, N4637 County Road Y, Jefferson WI 53549

A Family Led Time of Remembrance will begin at 12:45 just prior to Mass.

Share Your Memory of
Paul
Upload Your Memory View All Memories
Be the first to upload a memory!
Share A Memory
Plant a Tree