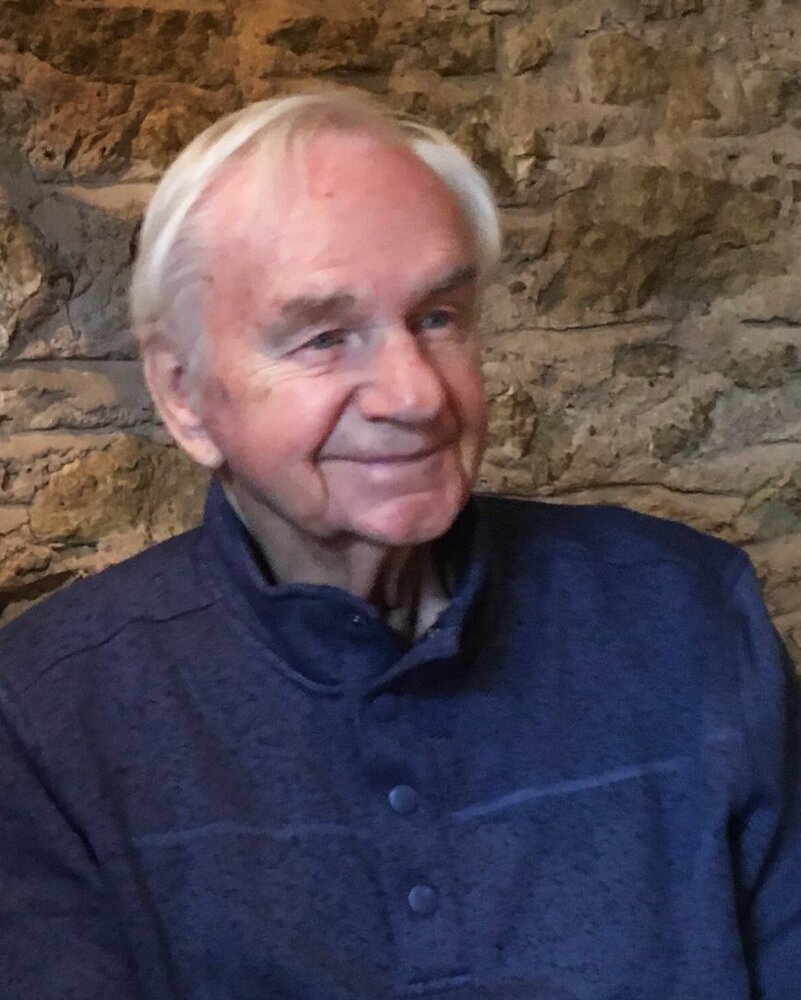 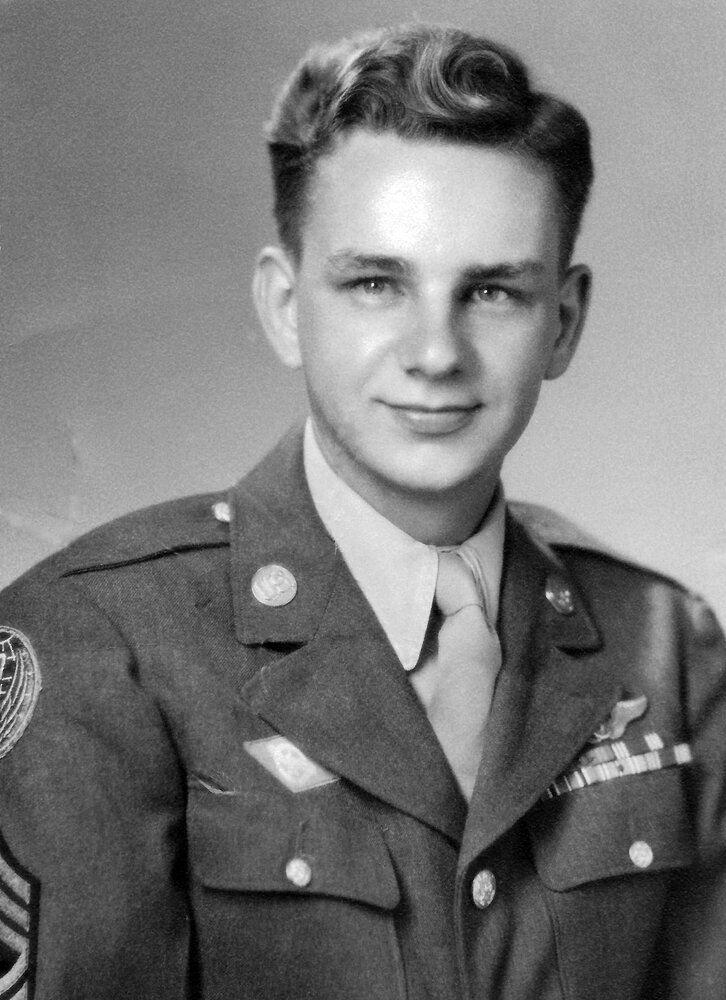 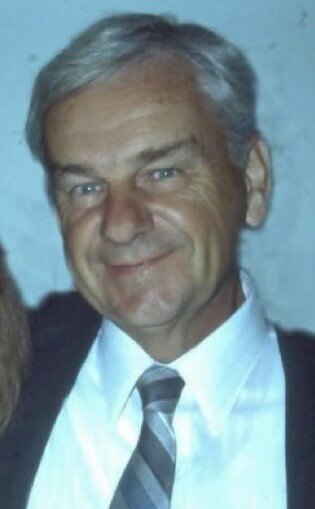 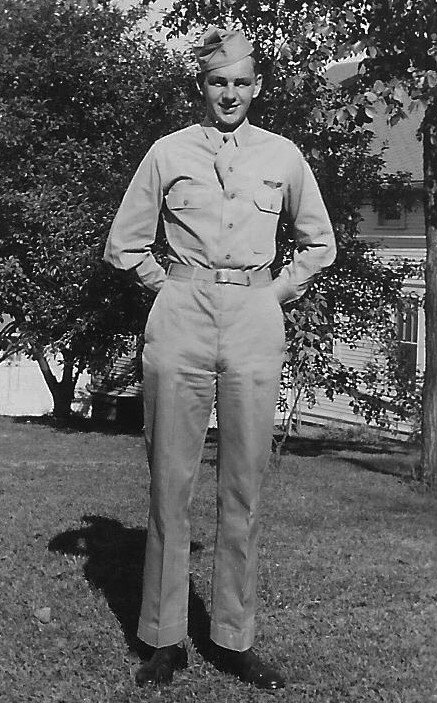 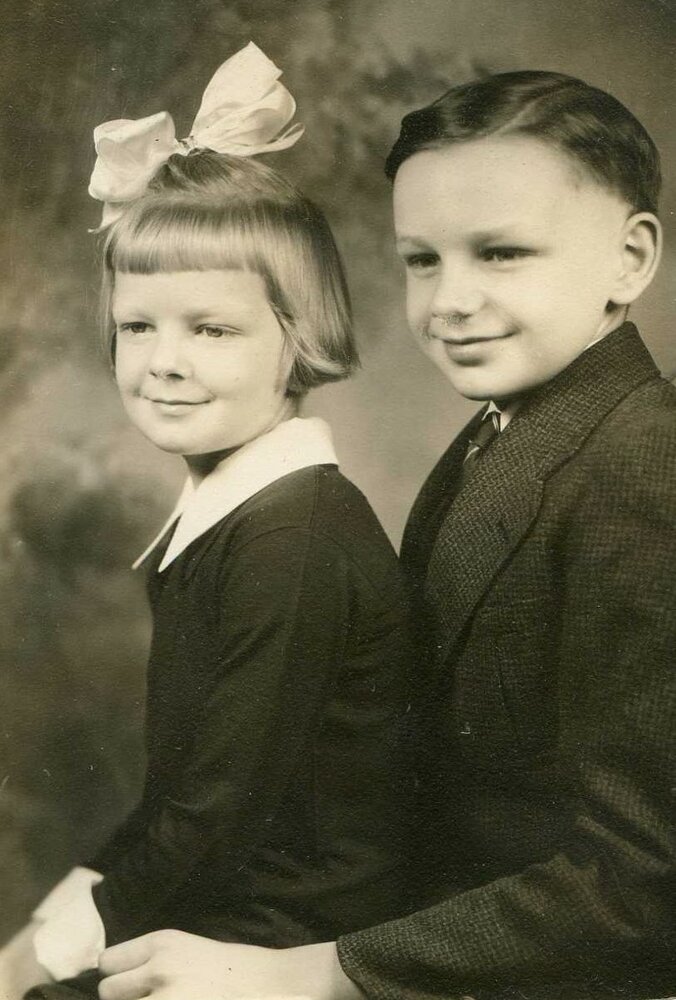 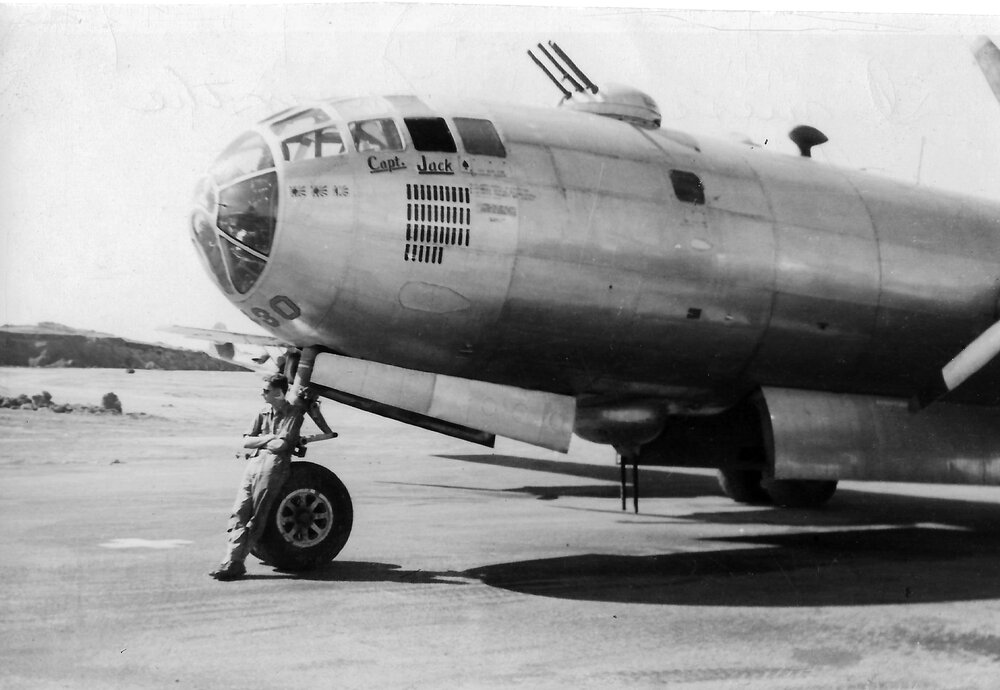 At 96, Dad embarked on his final flight and took wing to the wild blue yonder. He is soaring with the easy grace captured in the poem by a fellow WWII airman:

Oh! I have slipped the surly bonds of Earth

And danced the skies on laughter-silvered wings;

Put out my hand and touched the face of God.

Don was born in Jefferson, Wisconsin in 1925 to Mae and Ernst Nass. He was baptized and confirmed at St. John’s Lutheran Church. He and his younger sister, Dorothy, grew up during the Great Depression. From the age of 10, Don was working after school for his father’s Home Lumber Company, helping to deliver ice to home iceboxes and sometimes even driving the ice trucks.

On December 7, 1941, Don and five of his high school friends were playing one of their endless series of ping pong games when they were interrupted by the news of the bombing of Pearl Harbor. They all piled into a car and headed to the soda fountain where they plotted their revenge and toasted their bravery over ice cream and sugar. Two years later after graduation, Don turned 18 and joined the Army Air Force. Don was assigned to the 20th Air Force, 314th Wing, 29th Bomb Group. He became the Central Fire Control (CFC) or top turret gunner in a B-29 Superfortress based on the island of Guam, flying sixteen-hour bombing missions to Japan.

Don was honorably discharged in the spring of 1946. He loved his time in the sky so much, he became a pilot and eventually owned a plane with a couple of flying friends. Forty years later, Don began attending biennial reunions of his 29th Bomb Group. In 1993, Don asked his daughter, television producer/writer Sue Nass, to create a video of the group’s history to show at a reunion. That documentary, “Bomber Boys”, was shown on PBS nationally from 1995-1998.

Don became the manager of his father’s home building business when he returned from the war. A few years later, Don met his wife, Nadeane Lester of Winona, Minnesota, who had come to Jefferson to teach at St. John’s Lutheran School. They were thrown together as the lead singers in an opera designed to raise funds to buy gym furnishings for the new school. And as they say, the rest is history.

For each of us kids, we never had a single moment in our lives that we didn’t feel loved. Dad was chronically good-natured, spreading joy, playing football and building snow forts with us and the neighbor kids, entertaining us with jokes and songs, goofy “magic tricks”, and inventive stories. His tales involved a couple of heroes that emerged from his active imagination such as “Jimmy the Snake” an intrepid serpent who rescued children. And most vividly, a scary monster called “The Vernal Equinox” who ostensibly lived in the nearby Wisconsin State Park, Aztalan Mounds. He entertained his nephews, his niece, and in later years, the neighbor kids and eventually grandchildren with these same stories endearing himself to another generation of curious kids. His grandchildren also enjoyed fanciful excursions into the nearby woods where Don had buried secret treasures of “gold” coins to uncover and then wove tales of scary animals while cooking a can of SpaghettiOs over a campfire.

In the late 1960’s, Don changed careers and became a financial advisor. After retiring, Don derived great enjoyment from the gratitude of former customers who thanked him for knocking on their doors and making their own retirement years financially secure.

Don and Nadeane traveled the world together from Europe and the Soviet Union to and . They had an active social life that included annual excursions with the “anniversary gang” the afore mentioned “ping pong” high school friends (who all survived the war) and their spouses including Don’s sister Dottie and husband Harry Glander.

After retirement, Nadeane and Don spent their winters in Phoenix, Arizona near their son Larry where Don continued his fervor for playing ping pong, joining a league, and teaching the game to his grandkids. He also was an enthusiastic golfer, an eager downhill skier, and a faithful gym rat. The gym was both a physical and social outlet for Don and his many Madison gym buddies became cherished friends.

Don was an avid Packer fan, acquiring season tickets in the 1950’s and attending games at Lambeau Field well into his 90’s, including the 1967 Ice Bowl. He loved to play board games and cards, attend plays, movies, and his weekly men’s breakfast club, and was an avid reader. Recently, Don had several articles published in magazines and newspapers about harvesting ice in the early 20th century and his World War II experiences.

But his greatest passion was for music. Although he never had formal training, he was a gifted musician, playing the piano, accordion, and organ by ear. He had a strong tenor voice and sang in church choirs and competed in barbershop choruses. Moreover, Don took every opportunity to go to symphony, choir, and organ performances wherever he happened to be.

Don is survived by his children Steve Nass of Lake Mills, WI; his daughter Sue Nass and husband Steve Knick of Boise, ID; and son Larry Nass of Chandler, AZ.; grandchildren Clayton Nass and partner Katie Godding of Madison, WI, Katie Knick and partner Nick Basaraba of Fort Collins, CO, and Sasha Knick of Boise, ID, his sister Dorothy Glander of Agoura Hills, CA, his good friend, Shirly Koeppel of Watertown, WI, and a niece and four nephews. He was preceded in death by his parents, his wife Nadeane Lester Nass, his daughter-in-law Debbie Haines, and his “son” Peter Schäfer.

Dad’s generous heart will be missed by so many. He modeled positivity, warmth, a sense of responsibility, and he blessed all of us with his zany humor. As Charles Dickens wrote, “There is nothing in the world so irresistibly contagious as laughter and good humor.” We will miss him forever, but how lucky we were to have him for so long.

Don’s family would like to thank Sunset Ridge in Jefferson, WI and Agrace Hospice of Fitchburg, WI, especially Anne, for their care and support.

To send flowers to the family or plant a tree in memory of Donald Nass, please visit Tribute Store
Friday
11
February