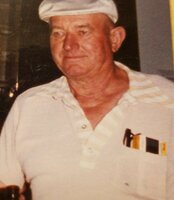 WILLIAM “WILLY” J. RUPPRECHT, 91 of Jefferson passed away on December 3, 2021, at the Rainbow Hospice Inpatient Center in Johnson Creek.  Willy was born on July 8, 1930, to Walter and Eleanor (Waleske) Rupprecht.  He was employed at Ladish Malt Company for 40+ years and also served in the National Guard.  Willy’s hobbies included hunting, fishing, and collecting antique vehicles.  He liked playing cards and was a member of the traveling euchre club.  He was a pig farmer for years and enjoyed his pork and sauerkraut.  He and Marge traveled extensively all over the world.  Willy loved to socialize and no matter where he went everyone knew him.

Mass of Christian burial will be held at 12:00 noon on Friday, December 10, 2021, at St. John the Baptist Catholic church in Jefferson with the Rev. Thomas Coyle officiating.  Burial will follow in the Parish cemetery.  Rosary will begin at 11:45 just prior to Mass. Visitation will be at the church on Friday from 10:00 a.m. until the time of Rosary at 11:45. In lieu of flowers, donations in William’s name may be given to St. Francis of Assisi Parishes, the Randy Schopen Foundation or Rainbow Hospice.